Towards the end of an episode of “The War,” a Ken Burns documentary on PBS, Mom said, “Paris is the city of lights,” with a gleam in her eye.

The men and women interviewed for this film were relating their experiences during WWII, when Mom was a young girl.

“Was Paris your favorite city?” I said.

“Vienna.” She had a dreamy look in her eyes.

Always a fan of books by the Brontë sisters, particularly Wuthering Heights, I assumed her favorite place in Europe would have been Yorkshire, England. She brought back a sprig of heather from the moors which she placed under the glass top of our antique coffee table, which is now in my house. She and my Dad traveled to Europe in 1972; it would be her only trip abroad. She kept a journal during that trip, jotting down her impressions. She used a delicate sprig of heather as a bookmark. 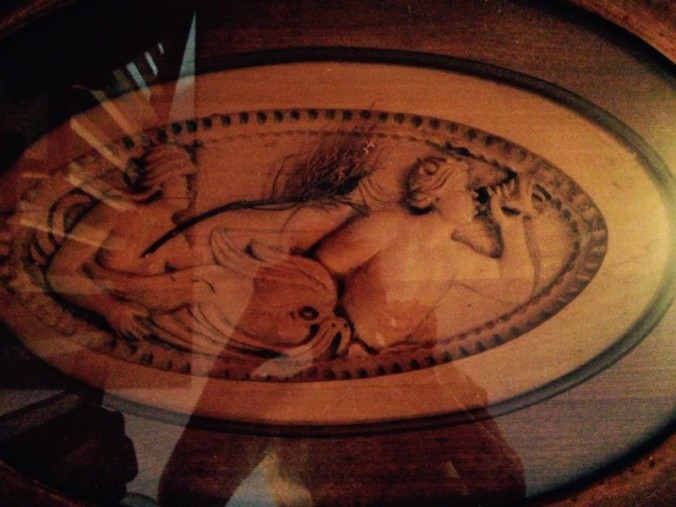 Her illustrated volume of Wuthering Heights from the 1940s was among the possessions that got ruined during Hurricane Irene. Most of her belongings were stored in our basement when we got flooded. She doesn’t know this, nor does she need to.

None of this matters anymore.

What matters is this moment, that she is happy recalling her time in Paris and Vienna, no matter how fleeting.

It makes me happy too.

Fourteen year old child protégé Jackie Evancho and Cheyenne Jackson are singing “Say Something”  on PBS, a taping of the concert “Awakening” at Longwood Gardens.

Now she’s singing “Open Fields of Grace,” the voice of an angel. The music transports me. Transported is where I want to stay.

Tired of the usual, the mundane. Take me to that fantasy garden on stage where she sings “Take Me There.” That’s where I want to be.

I just returned from a visit with mom, cut short by her unkindness. I will no longer stay when she is abusive and unkind.

The visit started out okay. We drank chai tea and ate Choco Leibniz cookies, her favorites. We took a spin around the floor.

Gina was shrieking in the dining room, “Leave her alone! Get out of here.”

James, one of the nurses, said, “She does this morning, noon and night. Our hands are tied,” and he motioned with his hands.

Ronald wheeled by, eating a chocolate frosted donut with sprinkles. She said, “I don’t like him. He’s an old fart.”

As I listen to Jackie Evancho, I think of how Mom and I used to sing together. She had the voice of an angel. Where did that Mom go? I miss her.

“Do you want to go to the concert upstairs?” I asked.

“Not really,” she said. Why didn’t I listen?

“Come on, Mom. We’ll only stay a little while.”

“Whatever you say,” she said.

Jackie is singing Bono’s “With or Without You,” the most heartfelt version I’ve ever heard. She smiles after each song, and says, “Thank you.”

She’s being interviewed and asked what she thinks her purpose is, and she says, with all the bad things happening in the world, she thinks it’s to make people happy and give them a release. She’s so unaffected, respectful and humble. How refreshing.

Mom and I arrive at the concert in the Music Cares Salon. “Do you want to go in?” I say.

“Okay,” and we head back upstairs and return to her room.

Raymond enters her room. “I can’t make it in,” he says.

Mom is blocking him with her wheelchair. “Don’t let him in, he’s been bad.”

“Yes,” he says, and I hand him one. He nibbles the chocolate off the edges of the cookie greedily.

“He’s been bad. He soiled himself and smeared it all over someone else’s room,” Mom said.

“I don’t want him in here.” She turns around and sees him.

He shuffles to the door, confused, cookie in hand.

I feel bad for him. Mom used to say how much she liked him.

“I can only come on the weekend. I have a full-time job.”

“Why do you have to work full-time? I give you money from my social security check and food stamps.” She is getting angry.

“No you don’t.” I have forgotten the Alzheimer’s rule: always say “yes, and,” as I learned in my improv training. I’m angry now.

“You’re all alone, you don’t need that money.”

“Whatever you say, Mom.”

“You have no idea what it’s like.” She is glaring at me.

“Okay, Mom. You obviously don’t want me here.” I pack up my stuff.

“Go ahead. You don’t want to be here anyway.”

I tell James, “She’s being a real bitch, so I’m leaving.”

He nods and says, “Your mom’s been very combative in the morning. She doesn’t want to get dressed or out of bed. She fights and curses at the aides.”

“The doctor’s thinking of giving her something to calm her down in the morning.”

“You too,” he says, smiling kindly.

Jackie twirls in her gorgeous white gown with pink vines climbing up and down it, raising her arms, bowing graciously as the audience applauds. Big smile on her sweet, bright face.