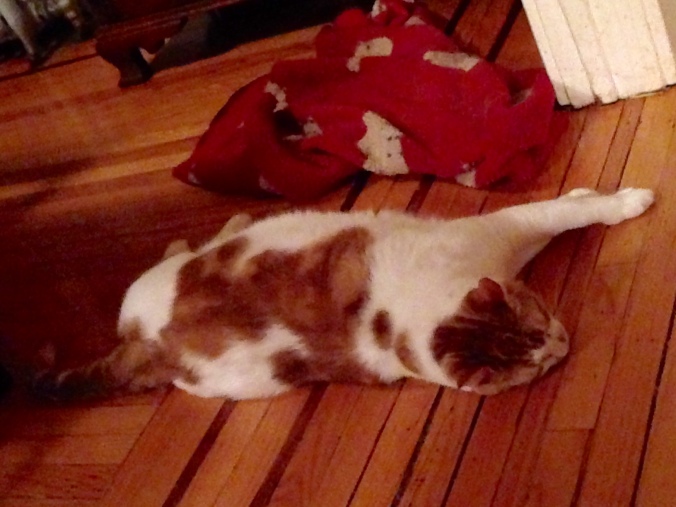 Last night while watching TV, Lorin and I heard what sounded like someone snoring. First, I thought it was the sleeping character in the show we were watching (Aquarius, on Netflix), but after the scene with the sleeping person had ended, the sound continued. Was someone sleeping on our porch or outside? What could it be?

I wandered into the dining room and discovered Bernie lying on top of the red hippo blanket (has hippos on it) and purring like a steam engine. The blanket normally sits on the chair in the back right corner of the dining room, but someone had moved it. A few days ago, Bernie started sleeping on the corner chair, which used to be Tisch’s (our deceased kitty) favorite chair.

I put the red blanket back on the chair, much to Bernie’s chagrin, and he quickly dragged it onto the floor again. Then he commenced kneading it and purring loudly.

When I went upstairs to bed, I heard him making strange vocalizations. Perhaps he was talking to the blanket?

This morning I discovered Bernie lying on the floor on top of the blanket. When I approached to him to ask what he was doing, he moved to the head of the dining room table (photo below), as if ashamed or not wanting to take responsibility for his actions. 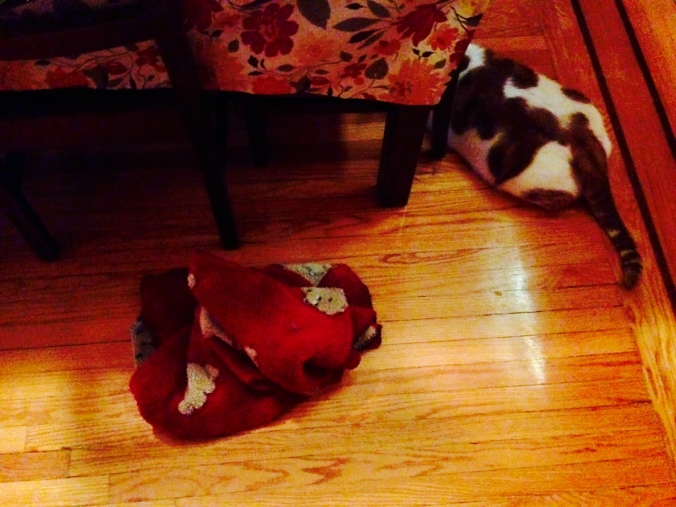 I assured him that he was not in trouble, but it didn’t seem to matter. I put the blanket back on the chair.

I wonder where I’ll find it tonight. 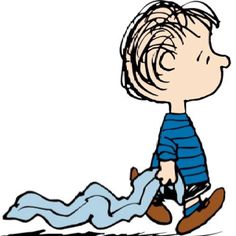 Update as of July 14: Last night Bernie was dragging the blanket around in his teeth and kneaded it while it was still in his jaws. It seems he was humping it as well.

5 thoughts on “Bernie and the Blanket”