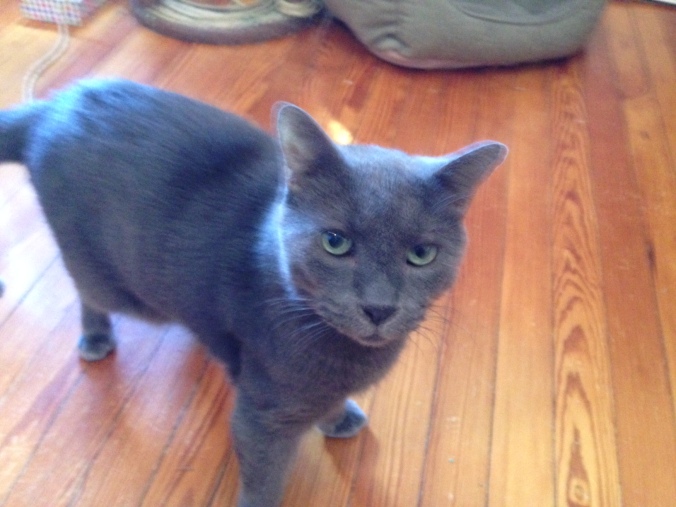 As some of you know, Bernie is the newest member of our “pride.” He’s been part of the family since April 23. For the first four weeks or so, he stayed upstairs and developed what seemed to be a strong bond with Karl (above). Karl lost his best kitty friend five years ago, so Lorin and I were very happy when we saw the closeness unfolding between Karl and Bernie. Karl is very timid and spends most of his time upstairs in the guest bedroom.

After four or five weeks, Bernie started coming downstairs. I think he realized that’s where the food and “action” is. He began playing with Samson and Quincy and sleeping on the sofa or one of the dining room chairs. Now he rarely, if ever, goes upstairs.

This has not been easy for Karl. Over the weekend, Karl tried to woo Bernie back through various vocalizations (some mournful and heartbreaking) and by sitting or lying near him or on his new scratch mat in the dining room. It seems this only frightened Bernie and made him feel cornered.

Karl can be extremely pushy and aggressive during play or when he wants affection.

This morning I was awoken at 4:45 a.m. to the sound of shrieking, growling (Bernie) and  woeful crying (Karl).  I headed downstairs and shuttled Karl upstairs and locked him in the bedroom with me. He was intermittently crying and panting, and when I got him to sit on the bed with me, I saw a tuft of white fur in his claw–Bernie’s. It took at least a half hour for Karl to calm down from what seemed like a panic attack. Lorin brought a dish of food and water upstairs, which he devoured.

Karl seemed much calmer after that.

I feel sad for him: it seems his heart has been broken a second time. I hope Bernie and Karl can settle their “differences” and become buddies again.