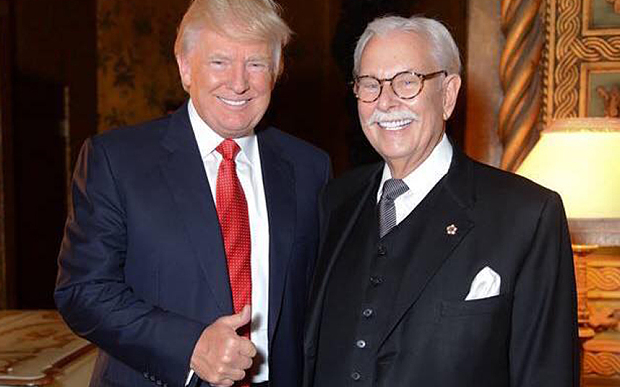 Happy Friday the 13th, everyone!

Those of you who perused today’s New York Times may have read the story about Trump’s longtime butler Anthony Senecal calling for the execution of President Obama.  He rants ad nauseam on his facebook page about his hatred for Obama. This story was uncovered by Mother Jones.

Trump campaign spokesperson Hope Hicks said in an email, “We totally and completely disavow the horrible statements made by him.”

I certainly hope so.

I read the article in Mother Jones which includes several of his facebook posts and responses to them. He repeatedly refers to “muzzies” (Muslims) and to President Obama as a “commie muzzie.”

To all my friends on FB, just a short note to you on our pus headed “president” !!!! This character who I refer to as zero (0) should have been taken out by our military and shot as an enemy agent in his first term !!!!! Instead he still remains in office doing every thing he can to gut the America we all know and love !!!!! Now comes Donald J Trump to put an end to the corruption in government !!!! The so called elite, who are nothing but common dog turds from your front lawn are shaking in their boots because there is a new Sheriff coming to town, and the end to their corruption of the American people (YOU) is at hand !!!! I cannot believe that a common murder is even allowed to run (killery clinton) OR that a commie like bernie is a also allowed to also run !!!! Come on America put your big boy pants on—this election you have a choice—GET YOUR ASS OUT AND VOTE !!!! Thank you !!!!

We can all shake our heads and say he’s insane or is suffering from dementia, but the fact is he has a forum for his hatred, and many people support his views.

In 1990 Senecal took a couple years off from his butler-ing stint at Mar-A-Lago in Palm Beach, Florida to become mayor of Martinsburg, West Virginia. One of his proposals was to require panhandlers to carry “begging permits” at all times. What a tender-hearted fellow!

Today, my employer and friend Donald J Trump announced he was running for the Office of President of the United States… NO ONE deserves to run for and be elected to this GREAT office, than Mr. Trump. !!!!!

His love and loyalty for Trump seem to no no bounds.

The Secret Service is going to investigate.

These are the times that indeed try men’s and women’s souls.

6 thoughts on “Trump’s Butler is a Wacko”