Bernie has been with us for a week now, and Karl has grown quite fond of him. 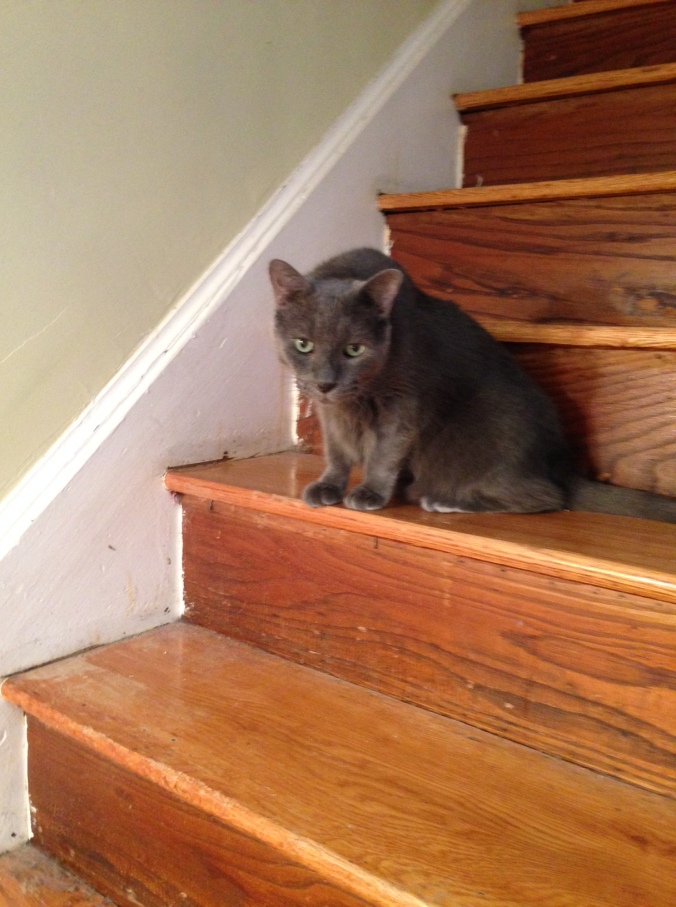 Karl’s best friend Magnus died of a heart attack in 2011–he was only 18 months old–and he has never really bonded with another cat since. Magnus was a fearless feline who helped build his confidence. Karl was the runt of the litter abandoned by his young mother and fostered by a very loving woman until we adopted him in November 2008, the day after Obama became president. Karl is timid and sweet and spends most of his time upstairs under the bed. We started feeding Karl separately in our bedroom when we realized the extent of food-bullying by the other cats. Bernie is the first cat to enter our home who is shyer than he.

Bernie is still holed up in the guest room, although he came out a couple times in search of more food. Last night I spotted him at the top of the stairs and tried to lure him down with kibble. Unfortunately Quincy nibbled the kibble before Bernie made his way down.

Karl visits Bernie frequently throughout the day. I’ve also caught him eating out of his food dish, even though Bernie gets a special weight management food, drinking from his water bowl and using his litter box. We are planning to bring the litter box downstairs later today.

A couple nights ago, Lorin fed Karl and Bernie in our bedroom and later found both of them under our bed. Karl likes to sniff him in the face and talk to him in his “cooing” voice. Bernie swatted him once, but it seemed out of fear, not anger.

We don’t know a lot about Bernie except that he came from a pound in Paterson, New Jersey, had matted hair on his back that had to be shaved off and his owner may have died. We also know he was at PetSmart since March 3 before we took him home. He was very popular, and liked to sit in a chair inside his enclosed area and watch the world go by. He’s a very observant cat. The lady at PetSmart told us that people keep asking about him, but his weight made them reluctant to adopt him.

It will be a while before his settles in with the rest of the boys, but we think it’s worth it. Especially if it means Karl will have a new friend. Every creature–human or non-human–deserves a second chance.