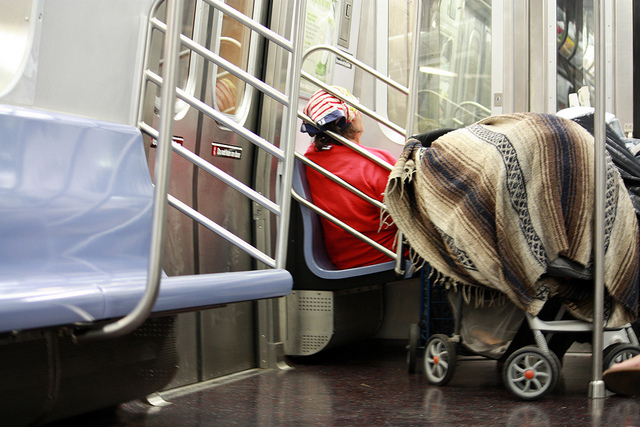 This morning on the “S” train which crosses from Times Square to Grand Central Station, a woman came on with an overflowing stroller containing what I assumed were all her worldly possessions, including bags of clothing and books. Her café au lait skin had sparse wrinkles, and silver braids were neatly pinned to the top of her head. She sat down, her stroller in front of her.

An agitated blond woman in a sleeveless turquoise dress addressed a male passenger, “Can you move in?”

There was a good bit of space in the middle of the car, which she felt was not being properly utilized. The man smirked at her, but said nothing and didn’t budge.

She said, “Come on, there’s room,” and she and another man pushed past him, the silver-haired lady’s stroller and climbed over my feet and that of other passengers who scrunched themselves into tight human balls.

“See?” she said. The smirking man made another face, saying nothing. Then he made fleeting eye contact with the silver-haired lady, which she may have taken as a slight.

The smirking man said nothing.

We arrived at Grand Central Station; no one said a word.

The silver-haired lady is one of the “people of no importance,” the homeless or less fortunate people you see every day. She’s a person who probably doesn’t make you stop and wonder, who is she, how did she get to where she is today.

Yesterday afternoon, Lorin and I were watching the 1994 film, A Man of No Importance with Albert Finney. He plays a closeted homosexual bus conductor in 1906s Dublin. His true passion is theatre and he puts on amateur performances of Oscar Wilde plays at the local church hall. He recites poetry in enraptured tones to his passengers and has a secret crush on the bus driver played by a young Rufus Sewell.

Like so many (including myself), he is an “average” man of no particular importance to society or the world. But who decides what or who is of value, of importance? Do money. property and station in life truly make the man / woman? If you touch or change one person’s life or a few or a dozen in a meaningful way, are you not valuable? I think so. Who’s to say that the silver-haired lady hasn’t touched someone’s life in a profound way. I guess we’ll never know.

16 thoughts on “A Person of No Importance”