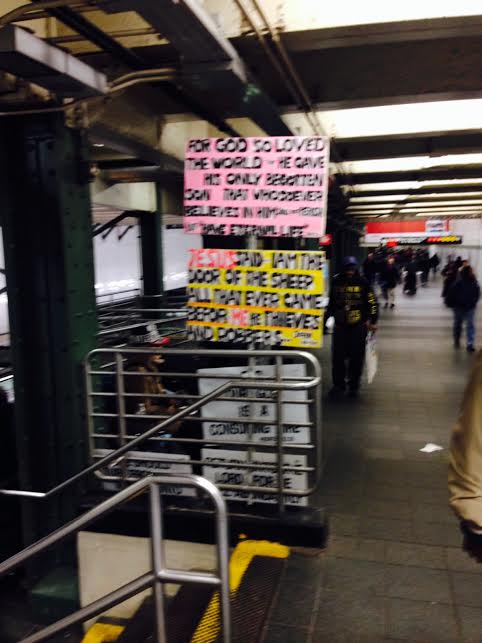 42nd Street Subway station preacher posters (a bit out of focus because I was afraid the screaming preacher was going to rip my iPhone out of my hand. He and another one were screaming “Abortion is murder!”)

Every day on the ramp from the #7 subway to Port Authority Bus Terminal at 42nd Street is a kind of mini-carnival of preachers, but last night was a full-fledged parade! They were coming out of the woodwork, I mean, tiles. Everywhere, all ethnicities and ages and temperaments. They almost outnumbered the commuters. Was it annual Preachers Day, and nobody told us?

Among the preachers were:

(1)    An unintelligible Korean woman holding a placard and shrieking Bible quotes or condemnations at the passersby.

(2)    A Latino man who approached a girl no older than 5 walking hand-in-hand with her mother. He got in her face and said in an admonishing tone, “It’s never too late.” Are you kidding? What sins has she committed? It reminded me of going to confession as a young girl and running out of things to confess. One of my “sins” was interrupting my dad when he was on the phone in his study. If I were that mother, I would have told the guy to leave my kid alone, or perhaps used stronger language.

(3)     A white stringy-haired guy standing against the wall, mumbling sotto voce. Too shy to be a preacher, I think.

(4)     A young African-American man wearing a brown hoodie with block yellow lettering on the back, “TRUST AND BELIEVE IN JESUS.” He hovered near the pamphlet / chachka table and said nothing. I wonder what his sales are like.

Tons of plaques and posters painted with scripture verses in primary colors, and one of Jesus, head bloodied by thorns, with an ocher backdrop, lined the walls. A painting depicted what looked like a man being lured by a prostitute (oversized woman, smaller man – you get the point) sitting in a come-hither pose.  I wasn’t able to make out what it said, will have to check back again tonight.

In the morning, there’s the African-American preacher in Frye boots and cowboy hat and bolo tie, who says, “Do not reject Jesus. Jesus will not reject you.” Listen here:

The energy of these preachers on parade is palpable. If only it could be harnessed and used for the greater good, to solve world problems, or help the poor, homeless and mentally ill and other disenfranchised people. If only they were DOING and HELPING, instead of preaching and accosting the innocent. I guess I could say the same about myself; only difference is, I’m not a preacher, but still, no excuse.

6 thoughts on “Preachers on Parade”