Lorin’s Mom was in town over the weekend and invited us to see the Matisse exhibit at the Museum of Modern Art (“MoMA”). We had a great time with her and her friend “B” who were visiting from Savannah, Georgia. It was a welcome respite from grimmer tasks related to the passing of Lorin’s father; after the museum excursion and brunch, we would head back to his dad’s apartment in Corona to continue cleaning, packing and throwing things out—he had a lot more stuff than we expected.

Lorin and I hardly ever venture into the city on weekends, tired from the weekly bus commute and general mayhem of the city. But when we do venture in, like most things in the Big Apple, it is never dull.

We arrived early, at Members Only hour, since Lorin’s mom is a member. Nevertheless, the Matisse exhibit was packed; in fact, the museum was going to be open 24/7 throughout the weekend so art aficionados could view the artist’s later works, including cut-outs from La Chapelle du Rosarie de Vence in France.

Scanning the crowd, which was sometimes panic attack-inducing, I felt myself entering a Woody Allen movie, with different camps emerging:

Leading camp #3 was the Art Witch (“AW”), with a sleek silver bob and piercing gray eyes, a black pointy witch’s hat (excuse the stereotype), a large silver pin impaling the rim, black leggings, wrap and booties. Her entourage consisted of a silver-haired gentleman with an nose and suspicious air, as well as sycophants of varying ages and types. AW glided from room to room, the entourage always a hair’s breath away clinging to her every word, taking her emotional temperature, so as to remain useful.

In the late 1940s, Henri Matisse primarily used cut paper as his medium, and scissors as his tool; these new works came to be known as “ cut-outs. A cut-out of grand scale was The Swimming Pool, taking up an entire room at the exhibit. I found it soothing, with the blues and tans. 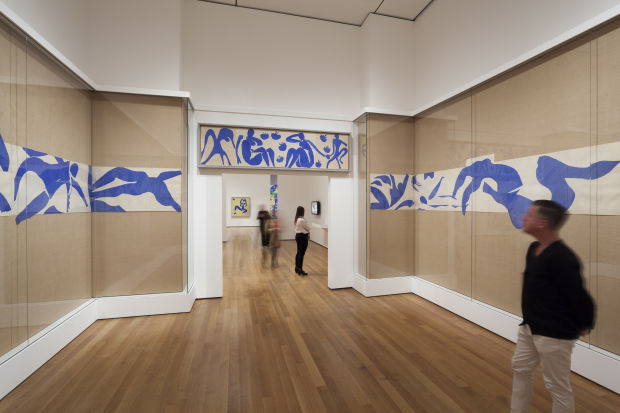 While in The Swimming Pool, Lorin overheard another patron say, “I could spend all day in this room just turning around and around.”

Hmmm. Personally, spinning around in that room all day would make me nauseous and dizzy—that goes for any room. That guy must have real stamina or else he’s full of shit.

8 thoughts on “Matisse, MoMa and the Art Witch”