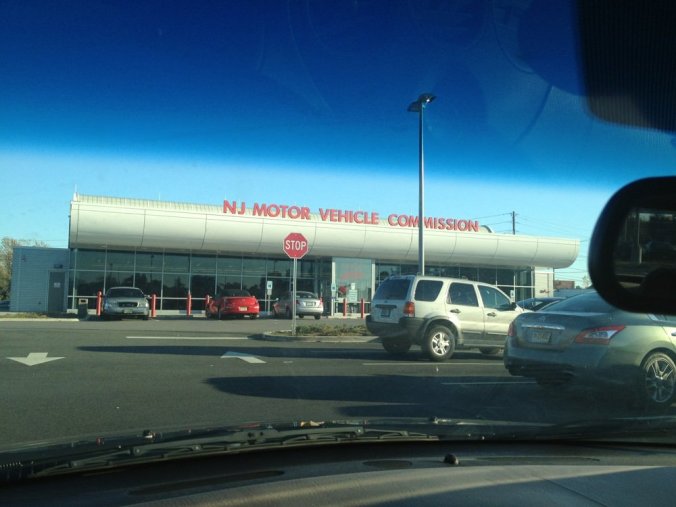 This morning I went to the DMV in Lodi to renew my driver’s license, arriving at around 8 a.m. After presenting and having my 6 points of ID approved at Checkpoint 1, I was given a cardboard number 30 and asked to sit down and wait for my number to be called. A group of middle-aged white men had gathered in front of us sitting “waiters.” One was all in black with a holstered gun. An armed security guard in blue manned the information podium in front.

I scanned the room for African Americans. I was praying that none of them would pose a threat, seen or unseen, and get shot by either the man in black or the man in blue. Can’t help it, my mind’s been going in that direction these days.

The man in black said loudly, “When I was in Korea during the war, I saw this guy take a cat and knock it on the head, then hang it upside down and skin it. (pause) I thought I was in a pet shop.” The guys in the circle roared with laughter. “A pet shop!” the man in black said.

It was too early in the morning to fully digest this kind of information. It felt like the rest of us were intruding on a good ole boys circle, or maybe they belonged in a fraternity lodge somewhere. I imagined them in the woods guffawing, hunting deer and doing other manly things—not that there’s anything wrong with that.

“I was in Ramsey yesterday afternoon, and the high school was on lockdown. Not sure what was going on.” the standing man said.

The man in black strutted up and down the floor like a peacock–patrolling, it seemed.

She said, “There’s a glitch in the computer system. That’s why it’s taking so long. I don’t understand—new computers and it takes longer.”

I made sure to “put on my face” before leaving the house, knowing they would be taking my photo for the new license and not feeling very photogenic.

A bespectacled woman with a lovely smile called me to window 6, and said “Hi.” She was much softer than the surrounding atmosphere, a breath of fresh air. I gave her my 6 points of ID and read a sign on the wall, “When posing for your photo, please keep a neutral expression.” Six photos of people of varying ages, sexes and races above the text demonstrated what a “neutral” expression was. None looked cheerful. I carefully studied their expressions: I can do that. Stay neutral, don’t call attention to yourself. There’s reason for this: the NJ Motor Vehicle Commission’s facial recognition technology software can only recognize a “poker face,” not a smile. This new technology is meant to combat drivers license fraud.

I succeeded on the first take. I was neutral with a dash of Serial Mom, and a slight turkey neck. Maybe it’s time for a neck lift. The woman with the lovely smile kept my new photo on the screen for awhile, almost too long. I didn’t want other people to see the photo, but it gave me time to study my wrinkles and neck.

“Yes, it’s fine. Can you remove the wrinkles?” I said.

She smiled warmly, “We do that on Saturdays.”

I paid the $24 and took my receipt. The lady said, “Happy Holidays!”

“Same to you,” I said, not afraid to smile now.

Next time you’re at the DMV, don’t smile for the camera.