Mom got me hooked on PBS. I once thought of it as un-cool, but Mom taught me otherwise. She never wanted cable TV, even when I offered to pay for it, so her staple was Channel 13. She told me about Masterpiece Mystery programs like Inspector Lewis, which I started watching at home.

Mom was diagnosed with Alzheimer’s disease in 2010 and in 2011, my husband and I had to move her into a nursing home. I brought her coffee, chocolate chip cookies and potato chips during visits and we watched channel 13 in her room. She’s a big fan of cooking shows like Lidia’s Italy, Jacques Pépin and Martha Bakes. We saw the Oscar Hammerstein II documentary, Out of My Dreams, Chris Botti in concert—mom’s a big fan—and Broadway Musicals: A Jewish Legacy, Call the Midwife and Downton Abbey. A nightly favorite for both of us is the NewsHour with Gwen Ifill and Judy Woodruff. I think I’m a bigger fan of Midwife than Mom is.

When I asked her if she caught the series on penguins, Spy in the Huddle, she grimaced and said, “yeah.”

Since her verbal communication skills have broken down with the progression of the disease, facial expressions and body language are often a more reliable indicator of what she’s trying to say.

Oh. I said, “I think they’re kind of cute. What about the babies?”

So we agree to disagree on that one. The nature show “Animal Misfits” aired on Wednesday. The misfits included forest-dwelling penguins in New Zealand, the leaf chameleon, mudskippers, a three-toed sloth and the kakapo—the world’s largest flightless parrot that mates once every 5 years. If mom didn’t like the “ugly” penguins, I’m sure she wouldn’t have liked the misfits, especially the aptly named Aye Aye.

I’m a misfit too. I have always felt like a weirdo, but that’s okay. Viva la difference! I think my mom’s a misfit herself, despite her disdain of the penguin. She grew up in Wisconsin during the Depression and became an actress against the wishes of her father and settled in New York. She didn’t want a “traditional” life.

During our evening phone calls, I always ask, “Are you watching 13?”

The other night she said, “I hope I get to see The Roosevelts.”

I ask her how Mouse is. Mouse is her stuffed animal cat, named after her real cat Mouse who died shortly before she went into the nursing home.

She says, “Mouse is fine. She’s always fine.” But on other occasions she says, “I’m worried about Mouse. She’s not eating. I think she’s sick.”

I tell her, “Don’t worry. Mouse is fine. But I’ll take a look at her when I come over.”

Living with Alzheimer’s is like a continuous improv exercise. Always say, “Yes, and . . . .” Go with the flow. It’s more upsetting for them if try to reason or contradict. It’s taught me how to live more in the moment.

It may sound awful, but I enjoy my time with Mom more now that she’s sick. She’s kinder, more serene. She says thank you more often. She smiles more too. 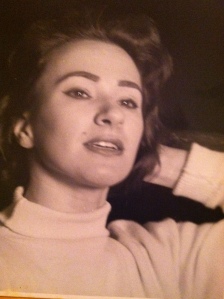 4 thoughts on “Misfits, Alzheimer’s and PBS”