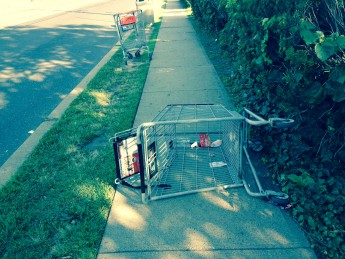 A few months ago, I was in ShopRite one night after work. My husband Lorin waited outside in the parking lot. I made my purchases and called to let him know I was waiting outside so he could pull the car up. We were loading up the car and one bag remained. I turned around, and the cart had vanished. At first I thought it might be one of the over-eager teenage cart wranglers who didn’t notice the bag. Then I wondered if someone had actually stolen the bag of sodas—two 4-packs of Boylan’s, one pack of root beer and one of cream soda—made with cane sugar and no corn syrup—Lorin’s favorite. Why would anyone steal 8 bottles of soda, though? Maybe they thought the bag contained more precious cargo, but wouldn’t it have been obvious at first glance that it was soda? I thought, it’s okay if it’s someone poor or homeless or a family of 8. At least they would have some delicious beverages to drink, made without high fructose corn syrup, one of our nation’s ingestible evils, responsible for obesity, autism, cancer, liver disease, tooth decay and even Alzheimer’s, because it isn’t fully metabolized by the body. Our soda was saving lives!

Lorin thought differently, though. He said, “Someone grabbed your cart because they were in a hurry.” In such a hurry that they would grab the nearest cart at hand and not notice the purchases inside? He said, yes, and added, “they wouldn’t care.” In my naiveté, I could not imagine someone grabbing a cart containing a fellow shopper’s groceries and not returning the cart immediately upon realizing what they had done. So they take our sodas and keep shopping, I asked. No, he said, they’d dump the bag out first. Have we, as a society, sunk so low? Forget world peace.

When it dawned on me that what he was saying could actually be true, I became incensed and wanted justice. That’s the Libra in me. Lorin locked the car, and we stormed the “Customer Care” desk, telling the young woman manning the desk what had happened. I pulled out the receipt and circled the Boylan’s soda entries. She made an announcement over the PA, “Shoppers, please check your cart for a bag of groceries that isn’t yours, and return it to the Customer Care desk.  Thank you.” No one came. Then I asked to speak to a manager, and told him the story. I asked if we could get a refund, a total of $7.38. It wasn’t the money I cared about, it was the principle of the thing. The manager said that that ShopRite wasn’t responsible for purchases once they left the store. So I could be shot as I exited ShopRite , and they wouldn’t be responsible for bodily harm to my person (I realize I’m not a purchase, so that makes sense) or to my grocery items that might get caught in the crossfire, say like a quart of milk riddled with bullets? Some policy. Lesson learned. I will never turn my back on a shopping cart again.